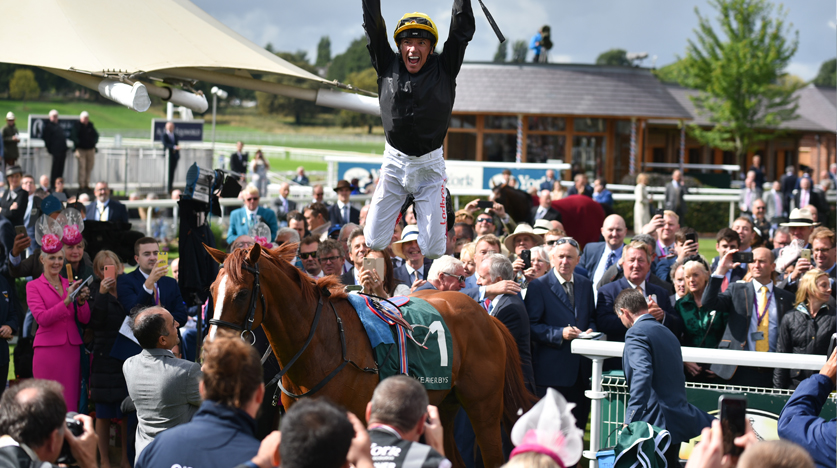 York Racecourse concluded its 2018 season today after a hugely busy year which has seen a strong attendance, as over 350,000 racegoers witnessed 122 races over 18 fabulous days of racing action. Nearly 1,400 horses competed for a record of more than £8.2m prize money delivering an impressive average field size, which looks set to retain its position as the largest in British flat racing.

In other excitements this year, Macmillan Charity Raceday in June raised a record sum of well over £500,000 for Macmillan Cancer Support and other charities, making it the biggest charity raceday in British racing and Macmillan’s largest single fundraising event, having now raised over £8m during the last 48 years.

Showing the variety of its customer offer, York sold out in all enclosures, on Summer Music Saturday (30th June), when seven races including the innovative “jump jockeys Nunthorpe” plus a concert by Paloma Faith drew in the crowds.

The opening day of the Welcome to Yorkshire Ebor Festival saw the million pound Group 1 Juddmonte International rewarded by a stellar field with seven of the eight runners having previously won at the highest level, eventually headed by Roaring Lion, currently the highest rated colt in Europe for his connections, Qatar Racing and trainer, John Gosden.

The balance of the Welcome to Yorkshire Ebor Festival saw an outstanding four days of racing action with Stradivarius taking the Weatherbys Hamilton Lonsdale Cup as the final leg in earning the £1m WH Stayers Bonus, supported by the same sponsors. Leading filly, Sea of Class took the Darley Yorkshire Oaks as part of her sparkling season, which culminated in a thrilling close up second to last year’s York heroine, Enable, in the Prix de l’Arc de Triomphe, just last weekend. Arguably the most dramatic moments of the season unfolded in the photo finish that decided the Coolmore Nunthorpe as Bryan Smart’s Alpha Delphini shaded Mabs Cross, trained by Michael Dods, in a battle of northern handlers. The gracious losers had their reward, last weekend when winning the Group One Prix de l’Abbaye. Tet another highlight of a tremendous week, was seeing Mark Johnston becoming the winningmost British trainer of all time after a dramatic win by 25-1 outsider, Poet’s Society, in the Clipper Logistics Stakes under Frankie Dettori.

The total attendance for the year of 350,998 showed a modest increase on last year, reflecting the highs of Summer Music Saturday, the glorious distraction of the Football World Cup, the disruption caused by train strikes on several racedays and the ill luck of some disappointing weather during a generally pleasant summer.

A wider challenge in July was the disappointing abandonment of the Tom Jones concert after thunderstorms in the South East disrupted the travel plans of the Welsh singer.

Malton based, Richard Fahey was crowned as the Charles Clinkard York Top Trainer; his hugely impressive sixteen winners giving him a ninth title. So the wonderful Skeaping Bronze will be heading to a familiar mantelpiece. The conclusion of the season long contest to be top jockey at York saw Oisin Murphy win the Living North-sponsored race after seven victories.

The 2018 season saw the £5million refurbishment of the infield of the course, as the newly named Clocktower Enclosure saw two new toilet blocks, improved pathways and infrastructure, which helped boost summer attendance and improve the experience in this important picnic area.

William Derby, Chief Executive and Clerk of the Course at York Racecourse said “What a memorable season 2018 has been. The continued investment in prize money, the track and facilities has been rewarded with tremendous sporting action. Thanks must go to all the horseman and connections of the stars for bringing them to the Knavesmire. York racegoers are rightly lauded for their love of the sport and they have been treated to some of the very best horses ridden by the very best jockeys once again this year. The achievement of Richard Fahey in setting a record for seasonal winners at York, as well the history making victory for Mark Johnston are the headliners to the underlying strength of flat racing in Yorkshire and we are proud to be part of a part of that community.”

“It is only proper to acknowledge the dedication and hard work of the permanent York Racecourse and York Racecourse Hospitality teams based at the racecourse, it is their efforts that have delivered such a memorable and successful season. The award winning experience for visitors to the Knavesmire is added to by the raceday team and our partners and suppliers who help provide the welcome. Some 2,000 people have given their time, talent and energy to make every York raceday so special.

“We remain hugely appreciative of the support of racegoers, boxholders, hospitality guests and sponsors, so very much hope they have enjoyed their own racedays at York in 2018 and will both look back on many happy memories, as well as look forward to many more!”

Head of Sponsorship and Marketing at York Racecourse, James Brennan, noted “The turn-out this year is a remarkable achievement.  Competition for leisure spending is intense and we continue to strive to offer quality racing, value for money and a great day out. I am pleased our programme of entertainment, investment and innovation has been so well received. The performance of Paloma Faith as well as that by Boyzone will provide memories into the winter nights. Another record number of participants enjoying the Ebor Fashion Lawn, a Family Sunday with a record number of young racegoers and the Countryside Raceday in October, were all exciting aspects which combined with top-class racing, service and facilities to provide great entertainment. The 2018 attendance and ongoing commitment of the course to buying fresh, local produce further support the independent economic study that concluded the racecourse was worth over £60 million to the York economy per annum.”

Summarising the year, Lord Grimthorpe, Chairman of York Racecourse, concluded “It has been an honour and privilege to be involved with such an exciting, enjoyable and successful season and I would like to thank everyone connected to York for their attendance, enthusiasm and support. Work will continue during the winter on both the race programme, facilities and innovations across the site to help us continue to attract horses and racegoers back to York for what already looks set to be an exciting 2019 season starting on Wednesday 15 May.”