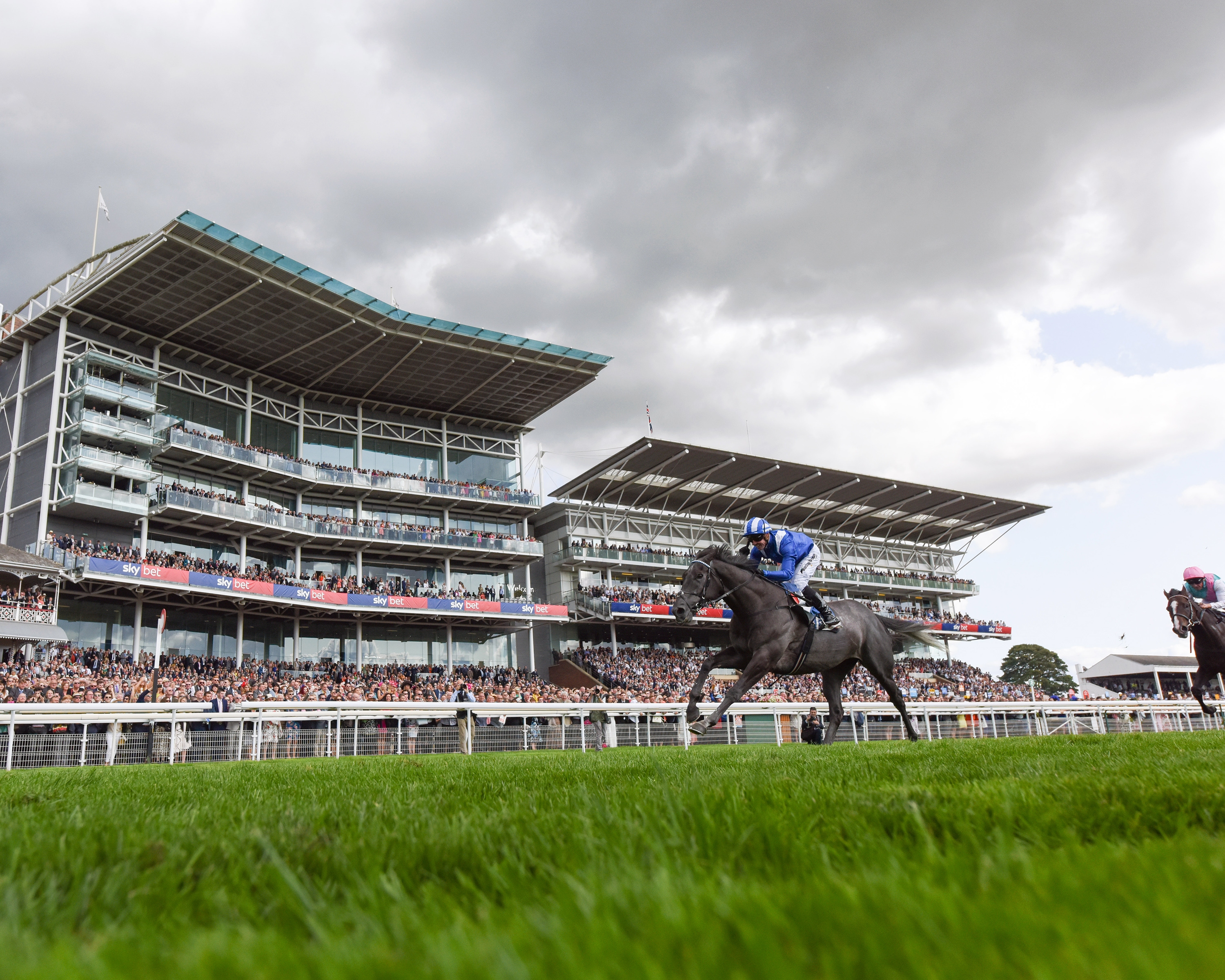 The third and final contest in Sky Bet’s "Race To The Ebor" is staged at York this Saturday, June 15, Macmillan Charity Raceday.

The £50,000 Listed Sky Bet Race to the Ebor Grand Cup (3.00pm, 18 entries) offers the winner an automatic place in the first £1-million Sky Bet Ebor at York on Saturday, August 24, the fourth day of the Welcome To Yorkshire Ebor Festival 2019.

Godolphin’s Ghostwatch (Charlie Appleby/William Buick) took the opening leg of the series, the Sky Bet Melrose Handicap at the Welcome To Yorkshire Ebor Festival in 2018, while the second leg, the Sky Bet Race To The Ebor Jorvik Handicap at the Dante Festival on May 15, went to the Khalid Abdullah-homebred First Eleven (John Gosden/Frankie Dettori).

The winners of the three races are guaranteed a start position in the 2019 Sky Bet Ebor provided they are entered, confirmed and declared in the normal way, complete with paying their entry fees.

In a further boost to connections, if these horses run in the Sky Bet Ebor 2019 and finish outside the top eight, they will then have their entry fees (worth £5,000 each) refunded. Horses that finish eighth or higher in the Sky Bet Ebor will receive £5,000 or more in prize money. The £1-million Sky Bet Ebor closes for entries at noon on Tuesday, July 9.

Heading the market for Saturday’s 14-furlong Listed Sky Bet Race To The Ebor Grand Cup with Sky Bet at 7/2 is Mekong (Sir Michael Stoute). The Philip Newton-owned four-year-old son of Frankel, fourth to Ghostwatch in the Sky Bet Melrose Handicap in August, was last seen when chasing home Dee Ex Bee in the two-mile G3 Henry II Stakes at Sandown Park on May 23.

Newmarket-based John Gosden could bid to win his second race in the series and his two entries are headed by the 112-rated Weekender (4/1 with Sky Bet), who was runner-up to stable companion Muntahaa in the 2018 Sky Bet Ebor before going to take third in the G1 Irish St Leger.

The five-year-old son of Frankel recently confirmed his well-being with a smooth success in a 14-furlong Polytrack conditions race at Chelmsford on May 9. The reigning champion Flat trainer’s other entry is four-year-old filly Highgarden (12/1), who could make her seasonal debut, having last raced when successful in the G3 Nayef Stakes at Newmarket in September.

An intriguing contender is Gold Mount (Ian Williams, 10/1). The six-year-old began his career in the UK in 2015 when under the care of Alan King and known as Primitivo. He went on to land the 2016 King George V Handicap at Royal Ascot before being sold to race in Hong Kong, where he was renamed Gold Mount.

A three-time handicap winner in Hong Kong, he was also placed three times in G1 company, including when third in the Standard Chartered Champions & Chater Cup over a mile and a half in May, 2018. His most recent appearance came when a staying-on fourth behind Melbourne Cup hero Cross Counter in the G2 Dubai Gold Cup over two miles at Meydan, UAE, on March 30.

“He ran at Meydan for Richard Gibson and came to us shortly after.

“The plan is to run at York on Saturday and it looks a good place to start back.

“He has been in good shape at home and there is the long-term option of going for the Melbourne Cup in November.

“The Sky Ebor is something to consider. We will see how he gets on this Saturday first.”

Four-year-old filly Bayshore Freeway (25/1), third in the G3 Bronte Cup Fillies' Stakes over the course and distance on May 25, and Chester Cup hero Making Miracles (9/1) could also represent the Middleham trainer.

Other contenders include Mustajeer (Ger Lyons IRE, 6/1), fourth in the 2018 Sky Bet Ebor, and the lightly-raced Rock Eagle (Ralph Beckett, 11/1), winner of the valuable Old Rowley Cup at Newmarket in 2018.

The 2017 G3 Bahrain Trophy winner Raheen House (9/1) could make his first start for Newmarket handler William Haggas, while Desert Skyline (David Elsworth, 12/1) drops down in class after his fifth to Stradivarius last time out in the G2 Yorkshire Cup on May 17.

Michael Shinners, Racing PR Manager at Sky Bet, commented: “Sky Bet’s ‘Race To The Ebor’ series concludes on Saturday with what should be a tremendous renewal of the Listed Sky Bet Race To The Ebor Grand Cup.

“With several proven Pattern-race performers featuring among the 18 entries, the Listed Sky Bet Race To The Ebor Grand Cup is unique in that it is the only race in the series that is not a handicap.

“We should hopefully gain some valuable pointers for the first £1-million Sky Bet Ebor on Saturday.”

James Brennan, Head of Marketing and Sponsorship at York Racecourse, added: “With the first ever £1-million Sky Bet Ebor now on the horizon, it will be fascinating to see which horse joins Ghostwatch and First Eleven as the final contender with a guaranteed stall, courtesy of the Race to the Ebor Series.”

Macmillan Charity Raceday, which has raised over £8 million for good causes in the last 49 years, offers a seven-race programme running from 1.50pm through to 5.15pm. Racegoers simply attend to help raise money.

The day comes to a close with the Earnest Cooper Macmillan Ride of their Lives, a chance for a eleven supporters to participate in a nine-furlong race around the famous Knavesmire.

Each has pledged at least £3,000 to the charity and you can help them beat last year’s contribution of over £125,000 by visiting their donation pages on Just Giving.

The charity auction, so generously supported over the years. is now available to view online in advance of the raceday. This means everyone can place a bid for the many stunning lots. One of the more unusual lots this year comes courtesy of Woburn Safari Park, who have offered a VIP tour that includes feeding the giraffes and getting up close to the lions and rhinos. Visit www.macmillanyorkraceday.co.uk  for more information on how to make your bid.