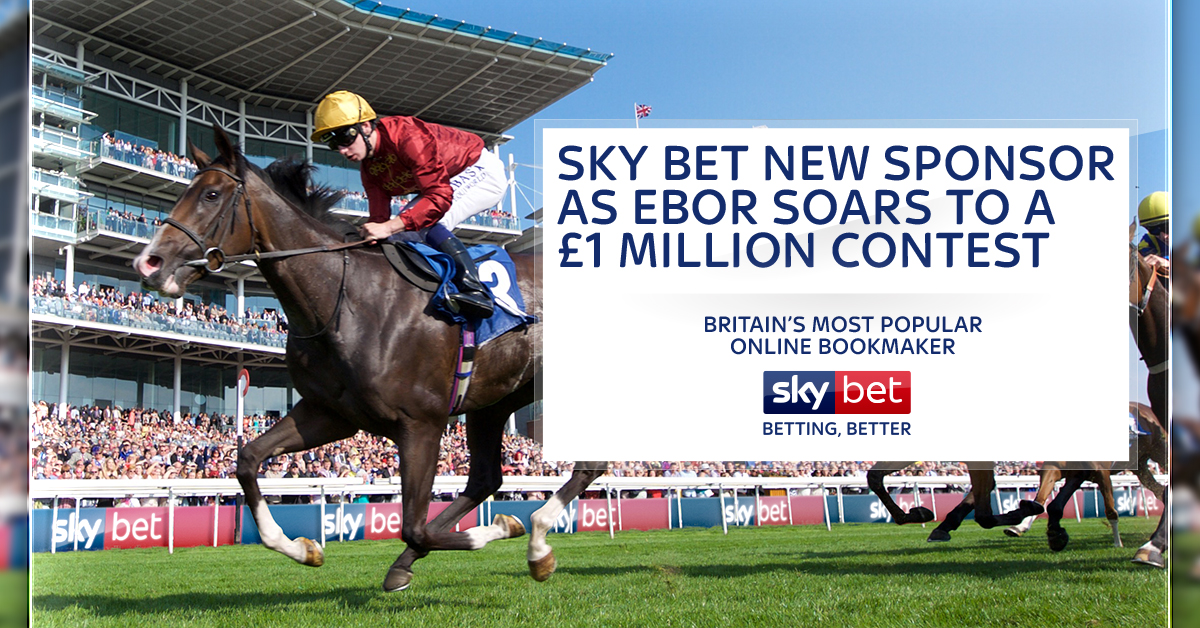 The Ebor, already the richest Flat handicap in Britain, is to be worth an incredible £1 million in 2019 after Sky Bet were unveiled as the new sponsors of the York showpiece – and they are vowing to create the most innovative, inclusive, adrenaline-fuelled Flat racing event of the year.

Britain’s most popular online bookmaker and York Racecourse have agreed a five-year partnership with prize money for this year’s renewal of the Sky Bet Ebor increasing by 75% to £500,000 and then leaping to £1 million the following year.

First run in 1843, the Sky Bet Ebor is an integral part of both the stayers’ programme and heritage of Yorkshire racing. The huge investment in prize money and changes to conditions will cement its place at the heart of the racing calendar and as a race everyone wants to win.

The race conditions for the Sky Bet Ebor will be amended to make it a race for four year olds and upwards, so ensuring this significant boost in funds does not distort the Pattern programme, particularly with respect to the programme for highly rated horses of the Classic generation. The established way of allocating the runners by weight rather than rating means that it is increasingly rare for a three year old to make the field for the Ebor and indeed there have been only two three year old runners in the last decade. The aim of British Racing’s strategy for stayers is to encourage the retention of owning and training stayers in Britain beyond their three year old careers and stakeholders in British Racing were positive in their support to this change to the Ebor conditions.

Sky Bet are also to sponsor the Melrose Stakes, regarded as being the “three-year-old’s Ebor” and prize-money there increases by 20% to £125,000 – and the £170,000 Great Voltigeur Stakes. Cracksman won the 2017 running of the Group Two contest, which is one of the top middle-distance races for the Classic generation, during the summer.

The Leeds-based firm, now in its 15th year sponsoring at the track, will continue to back the Listed City of York Stakes - Britain’s richest Group Three with a prize fund of £180,000 - and will add the £100,000 Group Three Strensall Stakes and two competitive handicaps on Saturday 25 August to its portfolio.

In total, four races on this day alone will benefit from increased prize money, as part of the new sponsorship agreement. There are plans in development to make Sky Bet Ebor Day even more of a red-letter day in the sporting calendar; more announcements will follow later in the year.

Announcing the plans for the Sky Bet Ebor, York Racecourse Chairman, Lord Grimthorpe said: “The Ebor has been a feature of my racing life and I think these plans set it on a firm course for future success. This great race encapsulates ambition, innovation and heritage, all of which are very much a part of York’s ethos.”

Speaking on behalf of the sponsor, Chief Executive of Sky Bet, Richard Flint said: “Sky Bet is proud to be based in Yorkshire and we are excited to be part of the future of such a great race. Today is only the first phase of an exciting partnership which I hope will mean fantastic things for Yorkshire racing.”

Chief Executive of the British Horseracing Authority, Nick Rust said, “British racing has made its commitment to the continued production of quality staying horses well known, and this sizeable investment is another boost for owners, breeders and trainers of staying horses. We need to do more to ensure that we keep stayers in training here in Britain and reduce the number of horses being exported overseas, and a £1m Ebor in 2019 will certainly be a significant incentive, as will the increased prize money for the Melrose.”

Middleham based trainer Mark Johnston, won the race in 1992 with Quick Ransom; his son and assistant Charlie said: “It’s a fantastic announcement. York and in particular the Ebor Festival, has been on an upward curve in recent years, especially in terms of prize money. This latest development backed by Sky Bet takes things to a new level. The prospect of a £1 million Ebor is fantastic for Yorkshire racing. It’s a race everyone is going to want to win.”

Richard Fahey has been the leading trainer on the Knavesmire on eight occasions so knows what it takes to win high summer, high value handicaps and noted; “It’s always been a great race but this is a real boost, there wouldn’t be many places prepared to offer this sort of money, so fair play to York and Sky Bet. The race will be on to find horses to go there with live chances now.”

Brian Ellison won the Ebor in 2011 with Moyenne Corniche and said: “It’s always been a special race to win – but the prize-money boost will make it extra special now! Hats off to York and Sky Bet – prize money at the track has always been good and this will really secure the Ebor’s place as the staying handicap everyone wants to win.”

Winning the Ebor Handicap of 1994 with Hasten to Add, is one of the many training feats of Sir Mark Prescott, who responded to the announcement by saying “This is wonderful news and a tremendous investment by York and Sky Bet in what was already the richest handicap in Europe. I also think it makes sense to exclude the classic generation who have other options such as the Great Voltigeur and St Leger; in the same vein, I was pleased to hear of the extra investment in the Melrose.”

Newmarket based trainer, Hugo Palmer, said: "This is wonderful news and something I have been hugely supportive of from the outset. I am sure that having a landmark handicap for stayers in Europe will help to keep talent here in the northern hemisphere and who knows, maybe an Aussie will try to win it one day too! We have all seen the impact that the Melbourne Cup has on Australian and world racing and it is great that York and Sky Bet have been able to invest so significantly in this famous race."

Head of the county’s tourism body and Festival sponsors, Welcome to Yorkshire, Sir Gary Verity said, “It’s long been a dream of mine to see a £1m Ebor so I’m absolutely thrilled that it is now set to happen; to start and end the week with a seven-figure race really shows the quality of racing at York.”